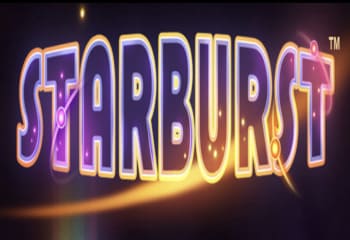 The Starburst online slot is one of the most popular titles by the NetEnt gaming house that ever set the market on fire. The 5 reels world of diamonds and gems come with 10 constant pay lines. Considered as the most popular slot machine gamer available on the Internet today, it is no doubt that Starburst is the most profitable slot title of NetEnt.

The Starburst slot machine has a stunning design and is located in space. The rich music, which has a cosmic air, makes it stand out. The visuals and animations are excellent resolution and still appear as nice as recently released slots, despite being published in 2012. Since its first release, NetEnt has updated the game several times.

When you obtain a winning combination, you will experience arcade-style light effects with flashing lettering and exciting music. On a dark backdrop, this shines out. The music is energetic but yet soothing and restful. When you construct a winning combination, it adds up. Despite its simple gameplay, it is mesmerizing and has a cult reputation among slot players. Our Starburst slot review will explain why.

How To Play Starburst Slot?

The Starburst slot machine has 5 reels, 3 rows, and 10 pay lines. With 10 fixed pay lines in play, you may wager anywhere from 10p to £100 every spin. Starburst is equipped with win-win technology. This means that you may construct winning combinations by matching three, four, or five symbols on neighboring reels, starting with reel 1 or reel 5.

When playing Starburst, you may also choose to auto-play the game. Spins are available in increments of 10, 25, 50, 100, 250, 500, 750, and 1,000. If you choose the Advanced options link, you may choose to suspend Autoplay on any win if a single win surpasses a particular amount or if your balance grows or drops by a certain amount. As a result, you will be able to play more responsibly.

Starburst falls under the low to medium variance category regarding volatility. This implies you should have a lot of little wins regularly. In actuality, a winning combination will appear in 22.65% of spins (commonly called the Hit Frequency). The maximum payout per spin/re-spin is 500 times the investment.

The RTP for Starburst is 96.09%. This is a nice midway ground for an online slot game. This implies that for every £100 wagered on the Starburst slot, you will receive £96.09 in return.

How To Win the Starburst Slot?

Win in Starburst slot game is completely based on different symbols and triggering varied combinations. Symbols include 5 distinct lighted jewels, a 7 sphere, and the BAR sphere in this fast-paced game.

Keep in mind that the Starburst slot is a win-win game. You wouldn’t win 250 times your investment if you filled the reels with BAR spherical symbols. A screen full of Bar symbols would result in a 500x stake win since winnings are built from left to right and right to left.

Different game symbols include Purple gem, Blue gem, Orange gem, green gem, Yellow gem, 7 Sphere, and the BAR sphere. The Purple Gem is the most valuable symbol of the game that offers a payout of 2.5x stake value when it lands in a combination of 5 symbols.

All you need to do is to trigger a winning combination of the symbols so that you can form a long chain of them. Once you trigger them, you stand a chance to hit the mega jackpot. If you want to big with your initial investment, you should target various bonus rounds offered by the Starburst slot.

Getting the help of free spins, you play the game without losing a penny from your wallet balance. Free spins and strategical playing are the secrets behind triggering a final jackpot that can reward players 500 times the stake value per spin.

There is only one extra feature in the Starburst slot game. While there is no typical free spins feature, Starburst wilds will expand to offer you wild reels and subsequent re-spins, which can result in three wild reels.

There are no Free Spins in Starburst, but it does contain the Starburst Wild symbol. It only occurs on reels 2, 3, and 4, substituting all symbols. The Starburst Wilds feature is triggered when one appears on any of the three middle reels.

After then, the Starburst Wild grows to cover the full reel, creating a wild reel. With a free re-spin, that crazy reel remains locked in place. If another Starburst Wild emerges, the sequence is repeated, giving you another wild reel and allowing you to re-spin.

Fill the three middle reels with an expanding Starburst Wild for a total of three re-spins. When no fresh Starburst Wilds occur during a re-spin, the bonus stops. It’s simpler to fill the reels with the high-value Bar symbol with three wild reels. This will result in a dividend of 500 times your stake.

The Starburst slot machine is a straightforward game. It is undoubtedly the most popular online slot of all time and can be found at almost all online casinos. Although several other slot producers have tried to imitate Starburst, none have the same attraction. It’s a true classic among classics and a bright star in the world of online slots. It has a minimal variance, with maximum winnings of 500 times your bet available on each spin or re-spin.